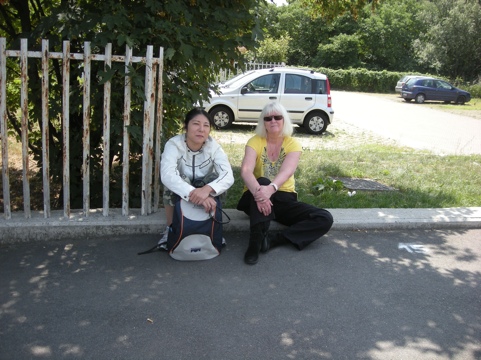 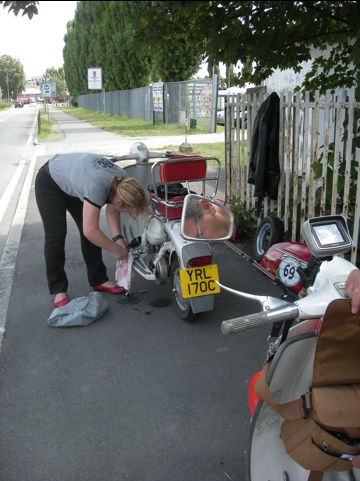 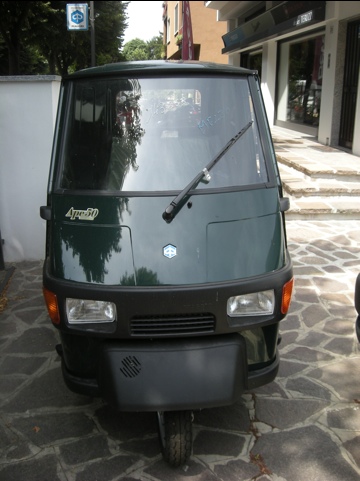 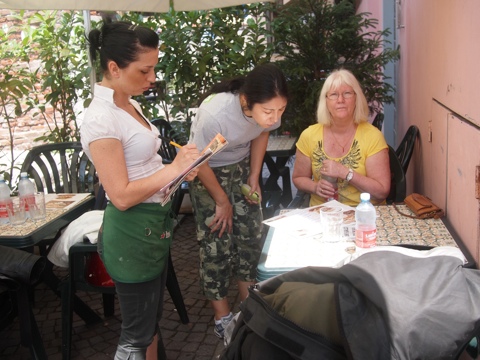 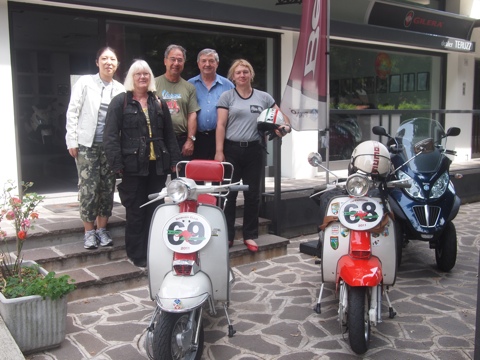 Yesterday we were going to lake Como for a run to see if Siobhan’s scooter was Ok.
We managed to go about 8km before things started to go wrong. The throttle stuck and the engine raced. So we stopped,near Meza, next to a cript. The day was very hot and Akiko and I were not very happy. Siobhan found out that she needed another nut and bolt as the bolt on the carbie snaped. A pasing motor cyclist was asked directions to the nearest place to get the part. Unfortuantley it was just on lunch time and every thing shuts for two hours, except the food outlets. So we had a great pannini and waited for the business to open. The only place that we could get the items needed was a Piaggio agency. THe boss was not very happy to help at first as he thought that we wanted him to fix it, but after explaining that we only need a bolt we became best friends and he took many photos . I loved the new three wheeler. As I have only seen the old labretta ones at home. After things were fixed we continued on to Gorgonzola here a man came up and we asked directions to the lake. He offered to drive in front of us as far as Monza which he did and then left us to our own devices. People on the way when we stopped for the lights asked as what we were doing etc. Just like when we were traveling around a couple of years ago. We decided not to go all the way to the lake as it was getting late and the trafic was getting very bad. We arrived back at the B&B and made our own meal.
Siobhan discovered on the way back that her kick start was bent and spent the best part of today replacing it.
Donato and friend came round this afternoon for a visit and his throttle cable broke. So Ron had to give him a spare. Goodness me and the race has not even started yet.
While they were fixing the scooters Akiko and I watched the Monaco royal wedding.
Vittorio of Casa lambretta in Italy has been most generous allowing us uninterupted use of the workshop and parts. Without this Ron and Siobhan would not have been able to manage.