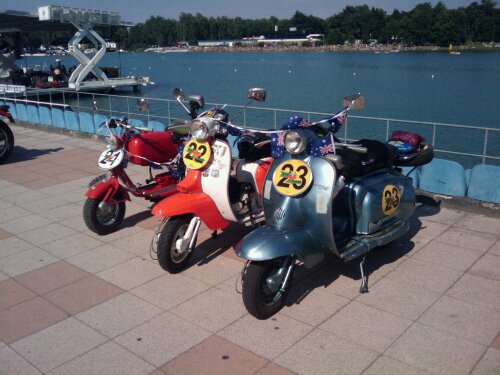 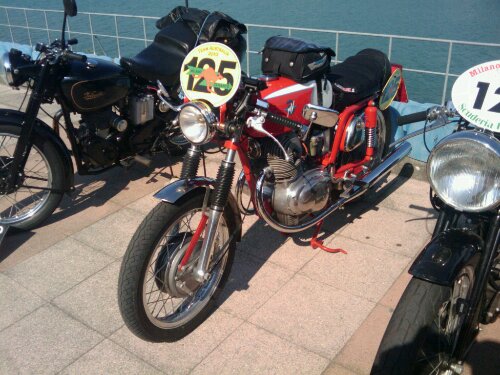 We have all arrived at the start and waiting for inspection.

A couple of picks to prove it….

==Update August 2010==
It was sooooo blooody hot that afternoon. The problem with Milan is it gets hot and humid.

Plenty of bikes turned up that afternoon (I think there was about 220 bikes that started) – they arrived in all sorts of ways, ridden (like we did), on the back of utes, trailers, vans etc.

At about 6pm the nbike inspection scommenced which is to say a bunch of poeple started forming up behind wheer the inspectin takes place. It was one of the better lines of people I have seen in Europe with some sense of order and not to muitch pushing in.

The inspection consisted of…. start it, lights work, quick look over by the staff and that was it, no horn check (to many bikes would have failed I think), no real concern for oil leaks or stearing head slop, I guess it was up to you to take responsibility for your own well being – I have to say that this is a fine mentality to have and one which I approve heartily of. The inspector initials the head of the bike frame, gives you your pack (consists of race number bib, stickers, T-shirt, magazine) and you are free to go.

I was still shitting my self and just wanted to go get some sleep for the night that is soon to start.

They had a band playing at the start (rock band) which was very loud and made it hard to speak with fellow participants but its tsopped at about 9pm.

I drank a lot of water that night trying to keep my hydration up.

At about 11am after trying to sleep in the van (unsuccessfully) we all got changed into riding gear. I was going to wear a full leather riding suiot and jacket but it was still to hot so I went with the draggin jeans and jacket which were cooler.

At the start time (midnight) it was still very warm

Well the big day has arrived. It is stinking hot, getting to 36 apparently but unlike Perth the humidity is very high (about 50%) which makes for a draining heat. We are right now in the B&B trying to rest and keep out of the heat.

Ron’s, Graham and my bikes are ready to go, poor old Bill had a few problems with his scooter yesterday. The exhaust modification that was done on Friday resulted in the engine having no power so he had to take it back to be re-worked on yesterday. Bill is still working on the scooter now and it is very hot.

We will be arriving at the start at about 3:30 this arvo for inspection and all the other stuff that needs to be done then sit around till midnight for the start.

Just got an update that Bills scooter is done and its good to go.

So, all is good to go will update again tomorrow after the first leg!

==Update August 2010==
Truth be told I was very nervous, in fact sh!tting my self and was on my bed when writting the post above trying to get some rest knowing that I was not going to be sleeping a wink the coming night (and had not slept well the night before either).

Things going through my head…
Would my bike break down?
Would I fight sleep deprviation successfully?
Would I get lost in the dark?
Why the hell do they start at midnight?
How the hell do you operate the petrol bowsers that take cash after hours?

Well I have made it here. Flight was very dull but as yet I don’t feel jet lagged.

Dad finally got the bike out of customs this morning. A bit of fuel and it started second kick! Have spent the day getting it ready for Sundays start. Fitted mirrors and race numbers and gave it a polish and clean.

We picked up the support van an hour or so ago. O’bie (one of the other guys from oz doing the race with us) having never driven a van or driven in milan he drove tins massive Fiat van through the city. He was very concerned, thank god for tom-tom satellite navigation.

==August 2010 Update==
What I didn’t realise till 4am the day after I wrote this comment is that I left my bloody motorcycle jacket on the bus that took me from Malpensa to Linate, gutted. I really loved my Aerostich Darien jacket and looked forward to it and me travelling thsi great race together, what a pisser. Luckily Dad had bought his jacket which was exactly the same as mine so I borrowed his, he had a spare so he was not going without.

Well I’m in the departure loung waiting to be called to board the plane. Very sad to say goodbye to my wife and kids. Tears.

Its been a long hard road to try and get the MV inspected and out of customs but it would appear to have paid off.

Ron spoke to the agent in Milan Monday and she advised the bike has been cleared and that it can be collected from them.

In any event Renato will pay the italian agent if need be today when he collects the bike if they are still insisting.

I’ll rest easy when the bike has been picked up.

Yep – he has landed in Milan.

A text from him today finds that my MV is still in customs but is due to be released on Monday 28 June, just days before the race starts – thats cutting it fine but should be all good.

Hello to all reading!

With luck we (ie, Renato and I) will update this blog daily.  It serves as a running commentary on our participation in the Milan – Taranto race for 2010. plus some other bits and pieces we plan to do while in Italy.

You can read about the restoration of the MV Agusta on my personal blog here http://blog.depannone.com/?cat=8

Well Renato departs Perth in about 30 minutes, bound for Milan where he will get stuff sorted before I arrive.

With luck by the time I arrive my MV Agusta will have been released by Italian Customs and will be available for collection. I will be arriving in Italy next Friday (2 July 2010).

I can’t wait to get going but there is still a fair amount to do!